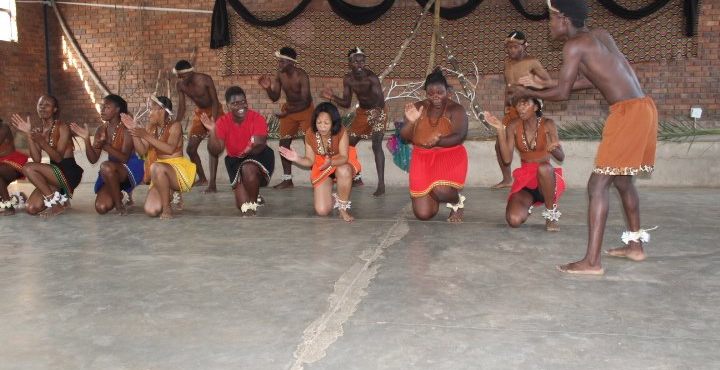 Kagiso Kekana (33), is a philanthropist, a moral philosopher and an enthusiastic youth developer, with a distinctive passion for the arts. She is a dynamic, and an inspiring independent young woman, who founded a non-profit organisation called Charismatic Rhythms Community Arts Hub, where she is a director.

“Charismatic Rhythms advocates for the development of children and the youth, through the creative methods of performance art and facilitation of life skills programmes,” said Kekana, unpacking the work she does in her community – Makhado, in Limpopo. Kekana is a role model and an example to many within her community and surrounding areas, who joined ACTIVATE! Change Drivers.

“I was inspired by Activators’ stories and how the ACTIVATE! Network continues to equip people with resources and to feed them meaningful knowledge,” she said. She concluded, “Furthermore, I was inspired to see so many young people gathered together, to discuss meaningful issues and bridging the roads that continuously contribute towards changing and impacting our communities for the better.”

Kekana claims to have encountered difficulties when she applied in 2016, but she ended up completing her application in 2017, which was an amazing moment in her life, and that led to her becoming as a member of the ACTIVATE! Network. “I have learned a lot, connected with like-minded individuals and partnered with other Activators. Also, I enjoy the content of the training sessions, the resources and the support that the network offers,” said Kekana.

She is a living testimony that the journey has had an impact on her life, her work, and those whom she works closely with. “Yes, most definitely, it has impacted my life and surroundings in numerous ways,” said Kekana. She added,” One of the young ladies that I mentored, from Moletjie in Polokwane, formed a soccer team and she started an annual soccer tournament. It is now in its second year, this year – 2018.”

Kekana concluded, “Charismatic Rhythms formed a partnership with the award-winning Sibikwa Arts Centre, to facilitate the Qinis’Ulwazi Project that is nurturing the talent of aspiring artists, so that they can acquire an accreditation in a short skills performance course. Lastly, four of our members are currently expanding the initiative throughout high schools, with performances of the play My Africa.”

She defines a hero as being an ordinary citizen who has it in her, or him, to pass all hurdles and to make things happen, for the sake of change. “A hero is someone brave enough to take the initiative, influence others and bring about positive change in the lives of those around him/her who are dependent on them,” said Kekana, paging through her tablet, finding images of the Soweto Uprising of 1976.

Her classification of a hero is, “Every young person who is bold enough to be actively involved in their community, through contributing towards positive social change, just like Activators, are my heroes,” said Kekana, acknowledging the work done by her peers in all walks of society.

When asked what the traits possessed by her heroes are, she said, smiling, “They are loyal and dedicated to their generational cause, with the ability to inspire, to maintain an undying spirit, and to continuously pass on opportunities to the rest of their society.” She believes that a hero should acquire competence in his or her leadership skills, have the ability to influence others, be people-orientated, be supportive of others, to pave the way, and to pay attention to, the welfare of others.

“Whenever I see young people acting selflessly to help those around them, I become encouraged and inspired to do more,” said

Kekana, with pride and confidence that the youth have the potential to drive South Africa into its promised freedom.